The Rotunda buildings nestling on either side of the Clyde river in Glasgow used to be the entrance and exit points of the tunnel that passed under the water . I daresay some of you have been through it , though it was blocked off before I ever had a chance to . The Southern Rotunda had until very recently lain unused for years but has now been transformed into swanky office space . This is a painting I completed yesterday showing it in all its glory , reflected in the river to which it owes its existence . 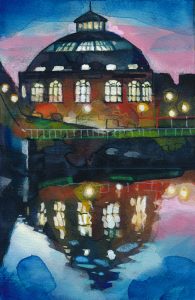